One of the biggest misconceptions about the city of Las Vegas is the legality behind prostitution. Despite the popular belief that just about anything in Vegas is legal, the state of Nevada prohibits prostitution in county’s with more than 400,000 inhabitants. Unfortunately for some, Las Vegas has a population that rounds out more around the 580,000 mark – creating a road block for anybody looking to score a one-night-stand with a lady of the night. Any trip outside the county limits to a city like Pahrump changes the provisions of the prostitution law, but it’s still not 100% legal. Even in areas where prostitution is legal, individuals can still be arrested up for soliciting sex outside of a licensed brothel.

So, if you’ve made your trip to Vegas in hopes of a taboo-filled night, you’re going to have to change your game plan. Be wary of temptation though, as the higher end Las Vegas casinos are still the home of many hookers who wish to cash in off of the daringly stupid or unfortunately naive visitors. These working girls usually hang out in casino bars, offering up tales of money woes, and keep their intentions to themselves until they’ve roped you in. If you look at all like you have money, chances are you’re going to be a target for them. Be wary of random girls approaching you and always make sure there is no price tag attached before going back to a hotel room.

Not getting caught up in the illegal act of prostitution really isn’t a hard task. If somebody asks you for money for sex, it should be easy enough to just say no – but some men just need that kind of distraction. Lucky for them, Sin City has plenty of other legal (and sexually driven) distractions that can be sought out instead. Hooker’s aren’t the only gorgeous working girls in Vegas looking to get a rise (and a dollar) out of a man. Scattered all throughout Sin City are strip clubs with girls that range from super seedy to flat out angelic. Clubs like Sapphire offer a higher end and cleaner experience with girls that seem to unnaturally ooze sexuality. With the option of lap dances and private shows, strip clubs offer plenty of ways to relieve the days tension.

Even if you’re not the “club going” kind, there still are alternatives to taking on the risk of being charged with paying for sex. A five minute walk down the Las Vegas Strip will introduce you to what can be called “Stripper Pamphlets”. Scattered about on Las Vegas Boulevard are individuals that rather snappily hand out what look like pornographic playing cards. While first glance may get you thinking that maybe the prostitution law is a little fuzzy for Sin City, these cards are not for hookers. For a price – and typically one that supersedes that of any strip club – a girl can be called up to your room for a very private show. So long as both you and the girl can exhibit restraint, there are no legal issues behind dialing that 800 number on the card found tastefully below some girl’s open legs.

Though Las Vegas may not be the place for you to go when you’re looking for a little costly loving, that doesn’t mean Nevada is a complete lost cause. Do you have yourself a vehicle and the time to travel approximately 60 miles west of Sin City? If the answer is yes, than your night of promiscuity is still a real possibility. Set in the near desolate town of Pahrump in Nye County, NV is a little place that, if you’re a watcher of the Biography channel, may seem a little familiar. The Chicken Ranch Brothel is Nevada’s number one escape for those looking to utilize the services of a professionally trained prostitute.

Chicken Ranch Brothel may be near in the middle of nowhere, but that almost helps to build up the charm of this legacy establishment. Despite a sordid history of lawsuits, arson, and much scrutiny, the Chicken Ranch is a prosperous establishment that thrives on mild-mannered people simply looking for a little time with an experienced woman that knows how to appease all types and all desires. The women of the Chicken Ranch Brothel are all experienced prostitutes that can make any experience a pleasurable one, regardless of the customer being a nervous first timer or a frequented visitor. Prolific in their craft, the prostitutes here are friendly, well mannered, and gentle (when required).

The Chicken Ranch Brothel, despite its soiled past, is a welcoming establishment that does its best to avoid being intimidating to newcomers. The environment is light and convivial and the ladies are more than a pleasure to gawk at. From the moment you walk through the doors the moment you leave, everything about your experience will be cordial and professional. This isn’t some third rate brothel who’s girls simply wander in off the street. The Chicken Ranch holds its girls to a standard that requires them to act and treat their patrons a certain way.

The brothel houses three themed bungalows, all decorated to the extremes to provide a lavish environment that enhances the experience. The space is almost just as important as the girl, so the Chicken Ranch’s ability to keep a pristine, luxurious space goes to show that the concept of a brother doesn’t need to be this seedy little hole-in-the-wall. The Chicken ranch is lavishly decorated, which helps to serve that welcoming atmosphere that makes it so easy to get comfortable in. In short, you’ll probably be surprised as to how attractive the Chicken Ranch itself is. 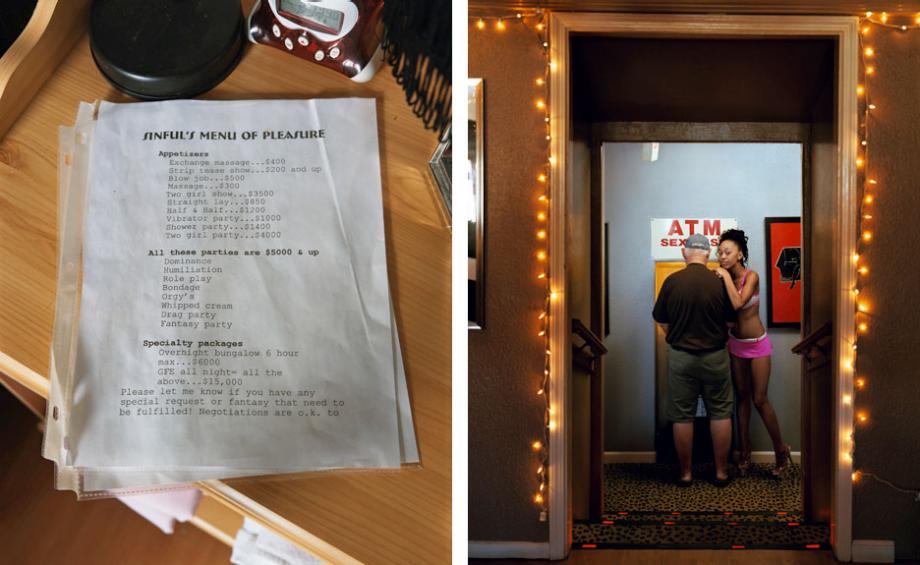 Attractiveness is a theme within the Chicken Ranch that carries over into the girls that work their. Each lady is a beauty and, if you’re not a return customer, you may find it hard to decide which one will serve your needs the best. These prostitutes aren’t just in it for the sex, either. They take their time, ensuring that each of their customers are not only comfortable but brought to the height of anticipation and the peeks of pleasure even before jumping into the deed.

You may have to travel a bit to get that truly naughty experience you wanted out of your trip to Sin City, but the Chicken Ranch is far more than worth the extra mileage on your vehicle. You will leave this brothel not only pleased, but feeling like a completely refreshed person. It’s like going to a spa that offers the ultimate in happy endings. So just remember, when you’re in Las Vegas, keep the pants on. Travel 60 miles west and, ironically, all bets are off.