The ghosts and ghouls are out in full swing, which could mean only one thing – it’s Halloween time! It’s time for the gals to start whipping out their skimpy costumes and for the guys to revel in the tantalizing sights. All Hallow’s Eve is about more than just barely-there costumes, though. It’s about the frights. The scares. The screams of terror in the middle of the night; and if you’re going to spend any part of this Halloween season in Sin City, you should take the time to check out some of the local haunts. Don’t worry, there will still be plenty of time for you to utilize your gals goods to win you some costume contests. 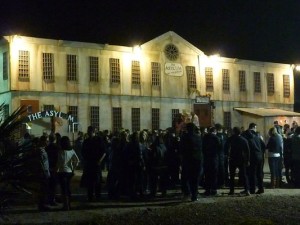 This haunted duo has popped up all over the Las Vegas Valley, having taken up residency along Las Vegas Blvd and Freemont Street in the same year; but this year the two attractions are joining forces at the Meadows Mall, just miles north of the Strip. Driving north on I-95, it’s difficult to miss the dilapidated building standing in the mall parking lot. Asylum and Hotel Fear are two different attractions, but both offer an array of impressive detail and worthy scares. From an asylum overrun by spooky inmates to a hotel home to a slew of spirits, these two haunts are premium attractions.

On top of their featured attractions, the crew behind these haunts are also sure to pack their active nights with unusual entertainment – from freak shows to celebrity guests. On Oct 24th at 9pm, Asylum and Hotel Fear will play host to the arrogant, chainsaw-handed Ash Williams and his crew of Deadites from Evil Dead the Musical. Join them, as they ay, for a cast meet and greet and a frightful costume contest.

During the off season, Circus Circus’ Adventuredome is a mecca for children, offering unusually family friendly entertainment for the Las Vegas Strip. During Halloween, 250,000 sq ft of Adventuredome space goes through a drastically blood transformation to create the much talked about Fright Dome. Known for being Las Vegas’ premier haunted attraction, Fright Dome features 6 haunts and 4 “scare zones”, where frights come from every nook and cranny. 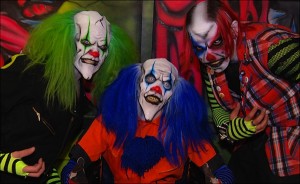 Fright Dome throws away the kid-friendly atmosphere and becomes the perfect Halloween hot spot. One of the newer attractions this year, The Collection, is based off of the film of the same name. “Victims” that go through this scare are forced to do so alone, so there’s no safety in number – a first for any Las Vegas haunt.

Fright Dome’s location at Circus Circus makes it the ideal point of interest for anyone staying on or near the Strip. A quick cab ride can get you there in no time – and if all else fails, you can just skip to the casino.

The Trilogy of Terror. Three high-end attractions to make you scream and squirm. From the Circus of Horrors to the “R” rated Gates of Hell, Freakling Bros’ ambition pays off by attraction a nightly crowd that some nightclubs would blush over. Enjoy the more extremes of what haunted attractions have to offer? Then you’ll fall in love with the Gates of Hell, which requires all that walk through to sign a waiver. Expect to be cursed at, screamed at, and touched in this brutally intense attraction.

Las Vegas may best be known for its partying, drinking, music, and entertainment, but during the Halloween season, things tend to get a little spooky. So forego the usual costume contest or overly freaky ball and take a stroll through some of Sin City’s most beloved haunts – and find out what really lurks the streets of Vegas when the sun goes down.